The future for Bitcoin price action may be much more bullish than the short-term charts, says Bloomberg Intelligence’s Mike McGlone.

Bitcoin (BTC) spoofed a breakout to fresh six-week highs into July 31 as a showdown for both the weekly and monthly close drew near. 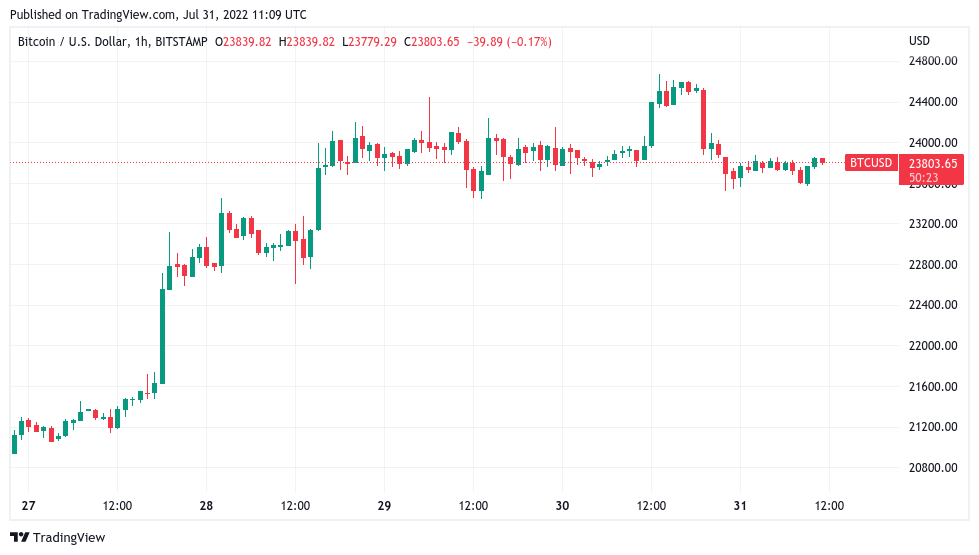 Data from Cointelegraph Markets Pro and TradingView showed BTC/USD canceling out all its gains from early in the weekend, dropping from $24,670 to $23,555 in hours.

The resulting chart structure was all too familiar to long-term market participants, creating a “Bart Simpson” shape on hourly timeframes.

Liquidations nonetheless remained manageable, with the cross-crypto tally totaling $150 million in the 24 hours to the time of writing, according to data from analytics resource Coinglass — less than on previous days.

For popular trader and analyst Rekt Capital, there was no reason to believe that the coming weekly candle close would confirm that Bitcoin had reestablished a key trendline as support after weeks of failure.

Looking forward, however, not everyone was convinced that the current market strength had much room left to continue.

“Negative funding has almost completely reset, just like in late March. We might even see positive funding on some alts soon,” he wrote:

“I think there’s one final pop into the shaded area before the bear rally fizzles away.”

Nonetheless, BTC/USD was still on track to deliver approximately 19% monthly gains for July, these starkly contrasting with any other month of the year so far.

According to data from Coinglass, July’s returns were even poised to be Bitcoin’s best since the 2021 all-time highs.

One of “greatest bull markets” could now await Bitcoin

Other perspectives paid little attention to the prospect of a fresh correction in the short term.

Eyeing potential performance in the second half of 2022, Mike McGlone, senior commodity strategist at Bloomberg Intelligence, left little doubt as to how Bitcoin in particular would fare.

Hints that the Federal Reserve would address rate hikes on a “meeting by meeting basis,” as per Chair Jerome Powell this week, “may mark the pivot for #Bitcoin to resume its tendency to outperform most assets,” he argued on social media.

“July marked the steepest discount in Bitcoin history to its 100-and 200-week moving averages, with implications for it to recover,” he added about the 200-week trendline:

“I see risk vs. reward tilted favorably for one of the greatest bull markets in history.”