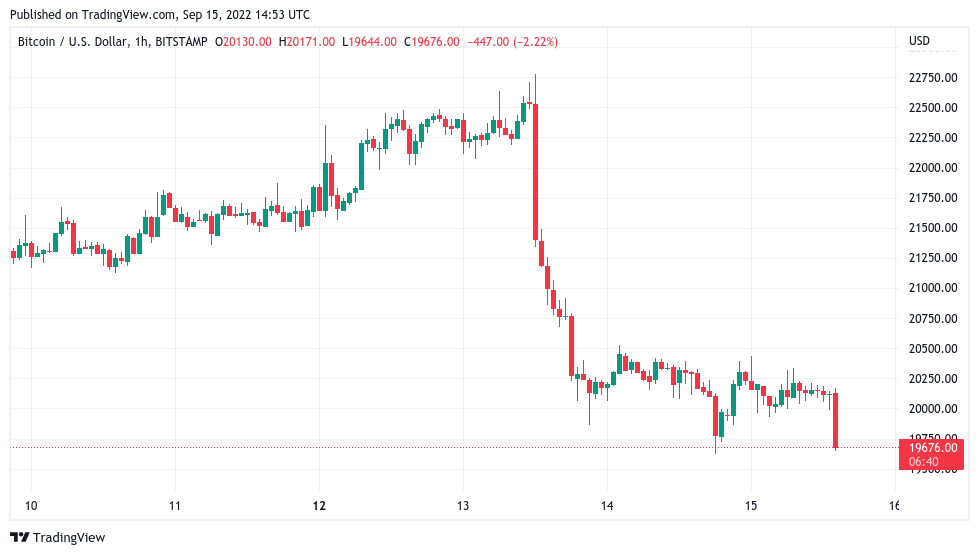 Data from Cointelegraph Markets Pro and TradingView showed BTC/USD spiking below $20,000 again overnight to recover marginally above the boundary for a brief period.

Down 13.5% versus the week’s top at the time of writing, Bitcoin offered little inspiration to traders who were still eyeing further losses.

Yes, we could pump from here.

No, the bottom is not in. pic.twitter.com/dXYKngcQtR

“Bullish above or after a reclaim of $20,800 or something like this and maybe up,” popular trader Crypto Ed summarized in his latest YouTube update.

“Until then, I do expect a bit more downside.”

Fellow trader Il Capo of Crypto again flagged $23,000 and $16,000 as important levels on either side of the spot price, calling them “like a magnet” in a tweet on the day.

“Maybe jobless claims of today have an impact, but that should be it.”

The S&P 500 and Nasdaq Composite Index were modestly up at the start of trading, like crypto still to recover from losses earlier in the week.

Altcoin markets meanwhile were led by the story-that-wasn’t on Ethereum, which failed to react positively to the Merge.

Despite the headlines, ETH/USD was down 8% on the day, circling $1,470 amid significant volatility.

We are all still here.

Reacting, trading firm Cumberland nonetheless argued that the Merge’s smooth transition to proof-of-stake (PoS) was a “momemental” achievement in itself.

“The fact that it was successful yet uneventful is an incredible testament to the people involved, what they’ve done for the world of crypto, digital assets, and decentralized computing,” part of a Twitter thread read.

“Every Bitcoin Halving, people said the event was priced in. But every Halving was a buy-the-news event,” Charles Edwards, creator of analytics resource LookIntoBitcoin, added.

“It seems everyone is calling the Merge a sell-the-news event. So I suspect it wont be. The Merge is Ethereum’s Halving.” 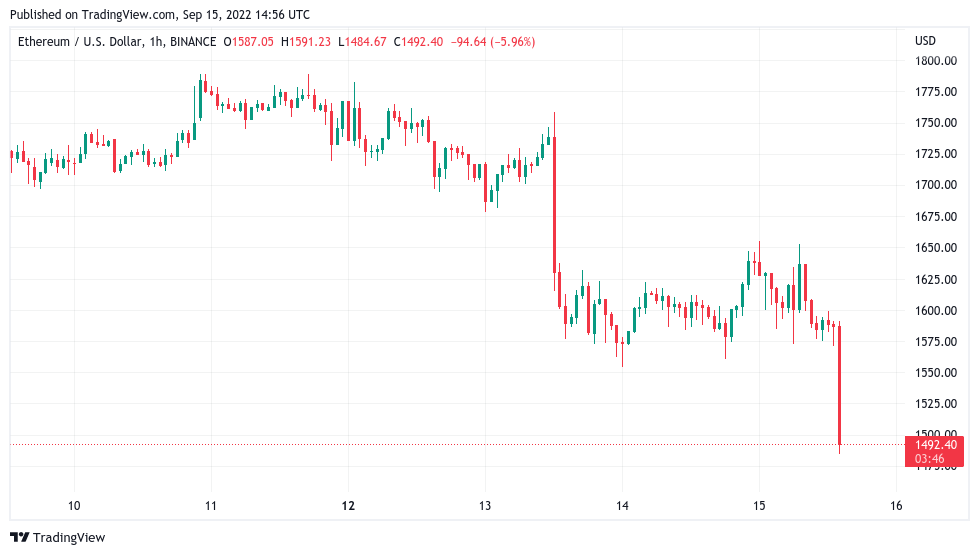