Current BTC price levels are being keenly eyed as a prime site for a macro Bitcoin price trend reversal. 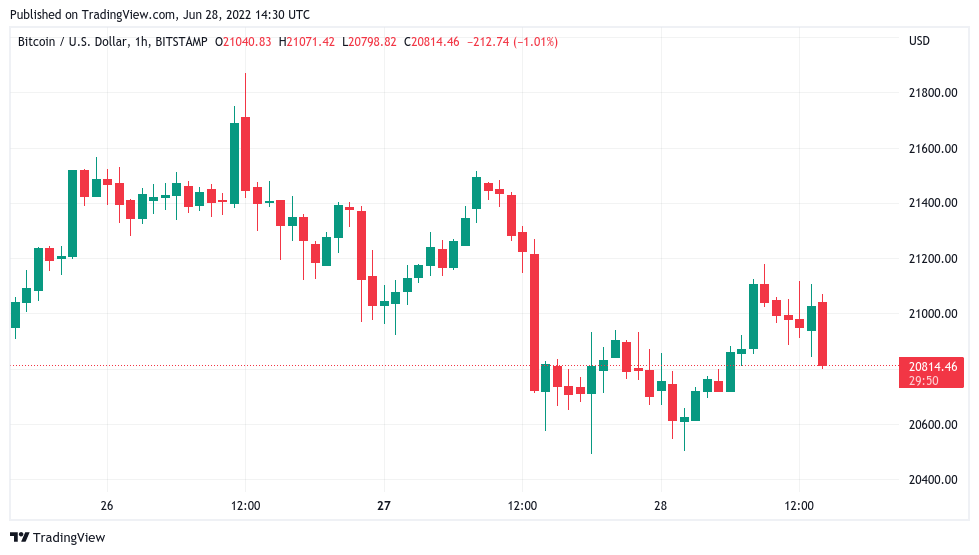 Data from Cointelegraph Markets Pro and TradingView showed BTC/USD circling $21,000 on Bitstamp, refusing to commit to a firm trend.

The pair nonetheless avoided fresh signs of weakness, leading Cointelegraph contributor Michaël van de Poppe to believe that an attack on important levels — notably the 200-week moving average near $22,400 — could be next.

#Bitcoin bounced upwards after sweeping the lows at $20.6K.

Honestly, was expecting a further correction towards $20.3K.

“In the past, Bitcoin has been a steal under its realized price, i.e., aggregate cost basis of all coins in supply. The realized price is currently sitting at around $22,500,” popular trading account Game of Trades added.

Among them was John Bollinger, creator of the Bollinger bands volatility indicator, who in a fresh take on BTC/USD flagged the culmination of a trend years in the making.

The next move, he suggested, could well be higher after a “picture perfect” double top pattern on Bitcoin in 2021.

Picture perfect double (M-type) top in BTCUSD on the monthly chart complete with confirmation by BandWidth and %b leads to a tag of the lower Bollinger Band. No sign of one yet, but this would be a logical place to put in a bottom.https://t.co/KsDyQsCO1F

Further analysis of whether the bottom is in for Bitcoin came from on-chain analytics firm Glassnode as the week began.

In its latest weekly newsletter, “The Week On-Chain,” Glassnode dissected a raft of on-chain metrics in various stages of signaling a bottom formation.

In an unprecedented macro environment, however, nothing was certain.

“Within the current macroeconomic framework, all models and historical precedents are likely to be put to the test,” it concluded.

“Based on the current positioning of Bitcoin prices relative to historical floor models, the market is already at an extremely improbable level, with only 0.2% of trading days being in similar circumstances.”

It noted that those who had bought BTC in 2020 and 2021 had provided the driving force behind recent selling.

“Almost all macro indicators for Bitcoin, ranging from technical to on-chain, are at all-time lows, coincident with bear market floor formation in previous cycles. Many are trading at levels with just single-digit percentage points of prior history at similar levels,” the newsletter added.

Sentiment was no different on the day, with the Crypto Fear & Greed Index at 10/100 or “extreme fear,” also constituting a classic reversal level in bear markets gone by.